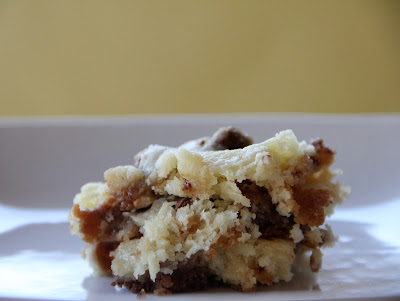 I know. They look weird.
And by the way that is THREE bars you're seeing.
Yes, THREE!

Oh and one thing I just remembered…
I never but the bottom half of the dough in the oven first.
OOPS. I'm impatient when it comes to my baking…
Probably because I'm so eager to devour my creations. :)

I don't know what went wrong {looks-wise}…
But they sure do taste AHHHHH-MAZING! Nothing went wrong there!

If you're wondering I MAY just have eaten that little
mountain of chocolate-cakey-carmaley goodness. :)

I'm happy I finally made them!
I pinned them on Pinterest awhile ago
and didn't think I would even be able to make them…
They just looked so good.
But then I remembered that one of theVERY FEW
American candies we have here is ROLOs…
WIN!

1 box yellow/white cake mix
5 oz. evaporated milk
{I actually didn't have evaporated milk… Instead I looked up a substitution: part milk and part half-in-half. Maybe that's why they don't look too pretty?}
1/4 c. butter, melted
40 Rolo candies, unwrapped and cut in half

Preheat oven to 350ºF.
Spray a 9x13 pan with cooking spray.
Beat cake mix, evaporated milk, and butter until combined.
Mixture will be thick and sticky.  :)
Divide mixture in half and press 1 half into the bottom of the pan.
Bake until just set, approximately 8-9 minutes.
Remove base from oven and place Rolo candies, caramel-side down on top.
Drop remaining batter on top of Rolos in teaspoon-size amounts.
Bake for 20-24 minutes longer until top begins to golden.
Cool completely before cutting into squares.